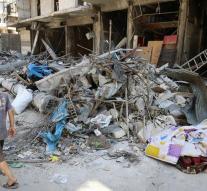 aleppo - The United Nations is ready to provide assistance in Aleppo, but all parties should commit that they lay down their arms for 48 hours. Russia already agreed to a temporary cease-fire.

,, The Russian attitude is positive, but it should not come from one side, '' said Stephen O'Brien, head of humanitarian affairs at the UN.,, Once we of all countries have the green light, we can deliver within 48 to 72 hours assistance. '

Aleppo is heavy fighting, the conflict has intensified since Russian and Syrian planes have increased the number of attacks on Syrian rebels. According to the World Food Programme, part of the United Nations, amongst other things an intense shortage of clean drinking water.