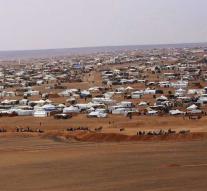 damascus - For the first time in almost a year, a United Nations aid convoy has reached a refugee camp in southern Syria. The 50,000 people in the Rukban camp near the three-country point of Syria, Jordan and Iraq need urgent help, according to the UN on Saturday. In addition to food, medicine and hygienic material, vaccines have also been put in place for about 10,000 children.

The last time the UN could supply the refugee camp was in January of this year. According to local activists, five people have recently died because of the pitiful situation in the camp.

Jordan closed its border with Syria last year and declared it a military area after an attack on a nearby Jordanian border post. The country states that it should not be held responsible for the circumstances in the camp.