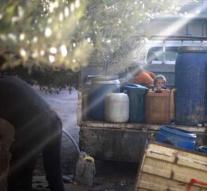 geneva - An aid convoy of the United Nations has reached the Syrian area of ​​East Ghouta on Wednesday. Trucks transport food, medicines and medical devices.

The region, which is still in the hands of rebels, has just finished the bloodiest week since 2015. At least 200 people have been killed by government troops, including air strikes. The estimated 400,000 people lack everything.

The convoy is the first since the end of November.