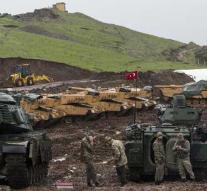 geneva - Turkey's military offensive against the US-backed YPG militias in Syria has driven an estimated 5,000 people in the Afrin district since Monday. However, some of the most vulnerable people could not flee, according to a UN report, with reference to local sources.

The United Nations is ready to provide assistance to 50,000 people in Afrin. The organization also has emergency supplies for 30,000 people in case of further relocation to areas in Aleppo under the control of the Syrian government, according to the report.

The North Syrian Afrin region is in the hands of Syrian-Kurdish militias who call themselves Public Protection Units (YPG). The YPG have US support in the fight against jihadists. The Turkish government sees in the YPG, however, an extension of the terrorist PKK (Kurdistan Workers' Party) and wants to prevent an independent Kurdish state from the wars in Syria and Iraq.