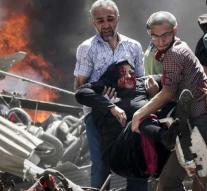 geneva - In Syrian and Russian air strikes, 230 civilians were killed last week. That is what the High Commissioner for Human Rights Zeid Ra'ad al-Hussein said on Saturday. According to him, it is one of the biggest violent outbreaks in the Syrian conflict.

The UN has video images that show that poison gas was used in Idlib on 4 February. According to the High Commissioner, it is about war crimes. 'After seven years of paralysis in the Security Council, the situation in Syria is crying out for reference to the International Criminal Court. '