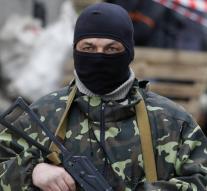 - Two Ukrainians are Sunday through shelling by pro-Russian separatists in the east of the country killed. Kiev According to the separatists have been 28 times broken the ceasefire.

A Ukrainian soldier was mortally wounded by the shelling, said a government spokesman in Kiev. In addition, a senior police officer was slain, who was trying to catch a car with wounded civilians out of the firing line.

According to Russian sources separatists from the so-called people's republics Donetsk and Luhansk not conducted attacks on Ukrainians.

The battle between the Russian-backed separatists and Ukrainian troops have been slain since 2014 more than 8,000 people, according to data from the United Nations.