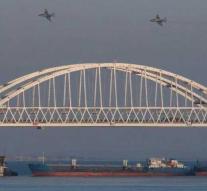 kiev - The three ships of the Ukrainian navy seized by the Russian army were towed to the port of Kerch in Crimea. Witnesses told the Reuters news agency that the ships are not badly damaged on the eye and that people in navy uniforms stopped at the vessels.

Russia seized Sunday the ships of the Ukrainian navy. According to the government in Moscow, the ships enter the Sea of ​​Azov against the agreements via the Kerch Strait.