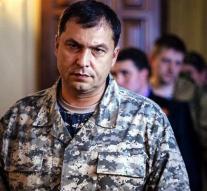 moscow - The Ukrainian-Russian separatist Valeri Bolotov, possibly had information about the downing of MH17, according to the 'Union of Donbass Volunteers' deceased in Moscow at the age of 46. Bolotov was the first political and military leader of the self-proclaimed independent People's Republic of Lugansk in 2014.

Konstantin Knirik, head of the information service of the 'Southeastern Front ', brought the news to the outside through the service's website. ' Bolotov is deceased by a heart attack in his Moscow apartment. He suddenly became unwell. ''