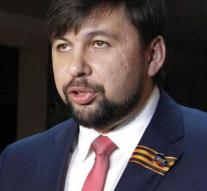 donetsk - The separatist rebel strongholds in eastern Ukraine have new leaders. It is in the self-proclaimed Donetsk People's Republic for Denis Poesjilin, who had already been appointed acting director earlier this year. That happened after the death of his predecessor Aleksandr Zachartsjenko, who was killed by a bomb attack.