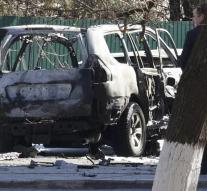 kiev - A Ukrainian officer of the state security Friday in the eastern port city of Mariupol slain by a bomb attack on his car. The SBU security service said Russian-backed separatists responsible for the attack.

'The SBU is the terrorists that the car with the SBU officer in Mariupol blew up as soon as possible punishment,' said a statement. The lieutenant colonel was killed deputy head of the local counterintelligence in the Donetsk region, parts of which since 2014 under control of Russian-backed rebels, reported the Ukrainian news agency Interfax. The SBU also gave no details.

Mariupol is located about 30 kilometers from the frontline of the conflict between the Ukrainian army and the separatists. The conflict has more than 10 000 people have been killed since April 2014.