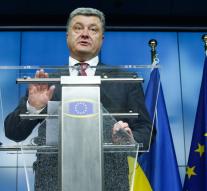 - Under the influence of a severe economic crisis and the bloody conflict in the Donetskbekken Ukraine holds local elections Sunday. About 30 million people are called to elect regional parliaments, municipal councils and mayors. For the pro-Western leadership of President Petro Poroshenko 's vote is seen as a test.

" Ukraine already has a new president and a new parliament. The political renewal process is now completed with the local elections ", said Porosjenko Friday in Kiev. In total 142 cast parties and more than 210000 candidates in the struggle for local offices. There is no vote on it by neighboring Russia annexed Crimea peninsula and the regions of Donetsk and Luhansk, controlled by pro-Russian rebels. The results will be known in the course of next week.