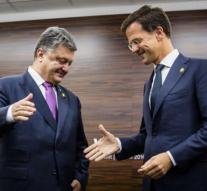 brussels/kiev - Ukraine is delighted that the European Union will extend economic sanctions against Russia for six months. President Petro Poroshenko is 'sincerely grateful for the unity and solidarity of the European leaders,' he wrote on his Facebook page.

The 28 government leaders agreed Thursday in Brussels as expected to extend the sanctions, which were due to expire in late January.

The sanctions were imposed in 2014 because of the Russian annexation of the Crimea and tightened later because of interference in the conflict in eastern Ukraine. The EU lifting of trade sanctions related to compliance with the peace agreement in Minsk, but that is violated daily.

The European capital market remains closed to Russian banks and apply to energy and defense companies remain limitations. This also applies to the export of technologically sensitive goods to Russia. Moscow has in response an import ban on European agricultural products.