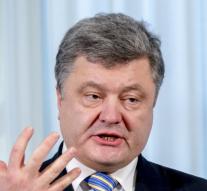 - Ukrainian President Petro Poroshenko want as quickly as possible by telephone consultations with several world leaders on the interstate tension on Russia and Ukraine. The Russian President Vladimir Putin has been invited for an interview.

Putin accused Kiev there Wednesday to terrorist tactics to provoke a new conflict and destabilize the Crimea. In response to the accusation Porosjenko brought his armies to the border with the Crimea and in the Donbass region Thursday in the highest state of readiness.