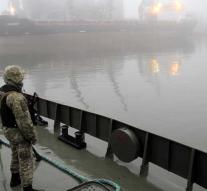 kiev - Ukrainian ports on the Sea of ​​Azov are actually blocked by Russia. As a result, dozens of ships can not carry out their normal tasks, says Ukrainian minister Volodymyr Omeljan (Infrastructure). The Kremlin denies the accusation.

Omeljan says on Facebook that eighteen ships are waiting for them to sail into the Sea of ​​Azov. Those vessels are on their way to the ports of Berdyansk and Marioepol. Vessels are also forced to anchor until they can leave the sea.