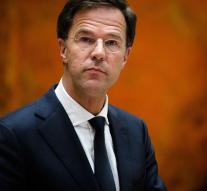 brussels - The outcome of the Dutch referendum on the association agreement between the European Union and Ukraine on Tuesday briefly discussed during the summit of heads of state and government in Brussels. However, they had their head more at the referendum in the UK that British membership of the EU was voted out.

Prime Minister Mark Rutte spoke briefly about the referendum in which the Netherlands early April turned against the association agreement. He said that justice should be done to know the outcome, leaving diplomats. It is now up to the Netherlands to meet with the EU 'step by step' 'to resolve.

Rutte said after the referendum that the Netherlands treaty 'can not simply ratify more. '' The treaty is ratified by all 27 other EU Member States and carried out despite the Dutch referendum largely subject.