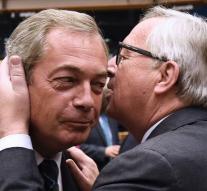 brussels - The right-wing populist Nigel Farage of UKIP (United Kingdom Independend Party) argued Tuesday that Britain would remain a close friend and trading partner, after leaving the European Union.,, We have won the war, now we must win the peace, 'Farage said on a visit to Brussels.

Farage wants quick but friendly terms regulate the EU departure from his country. UKIP has one seat in the British Parliament, but Farage, a member of the European Parliament, was a driving force behind the referendum last Thursday. It voted 52 percent for leaving the EU (Brexit).

The referendum is not binding, but the Conservative Prime Minister David Cameron has promised to pretend that it is. He offered as an advocate of EU membership Friday his resignation.