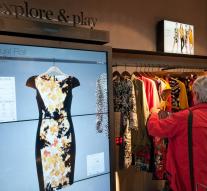 - Retail sales in Britain last month have increased much more than expected. Especially clothes and shoes were popular, according to figures published by the UK statistical office Thursday.

Shops in Britain sold in October, 1.9 percent more than a month earlier. This strong increase followed a marginal growth in September. Economists had anticipated a much smaller increase last month, from 0.5 percent.

Clothing and shoe stores saw increased sales in the strongest pace of the past two and a half years. Thereby benefiting from the fairly cold weather, which increased demand for winter clothing. Despite the strong growth in October 2016, moreover, still the worst year since 2009 for UK fashion stores.