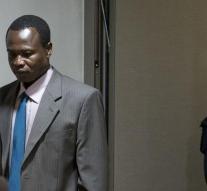 - The Ugandan Dominic Ongwen Tuesday on his first day of the trial before the International Criminal Court (ICC) in The Hague declared his innocence. Ongwen (1975) is the first member of the obscure armed group Lord's Resistance Army (LRA) who must answer to the international tribunal in The Hague. The leader of the LRA, Joseph Kony, is still missing.

Ongwen is itself a victim of the LRA, as he was kidnapped as a child by the gang. He is accused since then have risen within the LRA to right Kony. He was in the years 2002- have committed as commander of the LRA crimes against humanity and war crimes in 2004.

The LRA originated in the eighties. The battle group is a kind of cult around Kony and became notorious as one of the cruelest terror groups created among children many victims. Remnants of Kony's armed group, possibly including the leader himself, are still active in remote parts of, inter alia, the Central African Republic.

It is not known how long will the process.