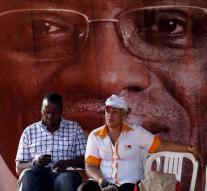 kampala - One of the candidates against the previous month reelected Ugandan President Yoweri Museveni is fighting the election on. Museveni won thanks to widespread irregularities, says former Prime Minister Amama Mbabazi. He has asked the Supreme Court to annul the results.

Mbabazi, who after a long cooperation against Museveni returned and took on him in last month's presidential election, yet took less than two percent of the vote. Mbabazi attributed the disappointing results to the security services, which intimidated candidates according to him, to ballot shortages, vote buying and flawed counter.