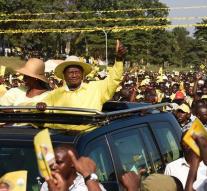 President Yoweri Museveni of Uganda has won the elections on Thursday. That the electoral commission announced Saturday in the country. A clean victory is not. The opposition has accused the authorities of fraud and European observers had little good to say about the polls.

According to the Election Commission Museveni, already more than thirty years in power, got more than 60 percent of the vote. His main opponent, Kizza Besigye, got just over 35 percent.

Besigye was Friday arrested for the third time in a week. Shortly hold a press conference before his arrest wanted the opposition leader, in which he would announce the results of polls that had kept his party FDC itself. Earlier this week, leaving the police shock grenades and tear gas to break up a protest by supporters Besigyes.

Observers from the European Union said earlier Saturday that there was during the elections of intimidation and that the electoral commission in the country is not independent.,, It lacks the Electoral Commission of independence, transparency and trust of all stakeholders, 'said Eduard Kukan, the head of the observer mission in Kampala.