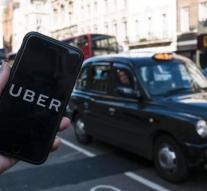 london - Uber is willing to make concessions to revoke the London withdrawal decision.

The company agrees to pay more attention to passenger safety and improve drivers' working conditions, such as limiting working hours.

The public transport supervisor in the British capital, Transport for London (TfL), drove the license on Friday because it believes that the company is not taking sufficient responsibility for matters of public policy and security behind the same taxiapp. Uber appealed against that decision. As long as the business is in progress, it can continue working in London.

The carrier has already collected half a million signatures in just over one day against the revocation of his London taxi license. The signatories of the petition call on mayor Sadiq Khan, who is also chairman of the supervisor, to cancel the decision.

There are about 40,000 drivers driving Uber in the British capital. About 3.5 million Londoners use the app. Thus, the final loss of the license would be a major blow to the American company.