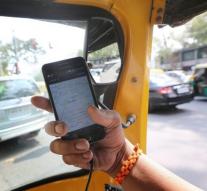 - Uber Technologies invests in the coming period some $ 250 million in the expansion in the Middle East and North Africa. The company behind the eponymous taxiapp wants its services to offer including in other cities in Saudi Arabia, Egypt and Pakistan, as did Uber Tuesday.

Uber wants to use the money for hiring new drivers and support staff. In addition, Uber will invest in mobile applications. Uber services should be first in Lahore, Pakistan 's second largest city with an estimated 10 million people, are rolled out.

According Uber include the Middle East and Africa, where two years ago began offering his services, the fastest growing regions for the company. It is now in the region active in nine countries including Lebanon, Turkey, Israel and Jordan.