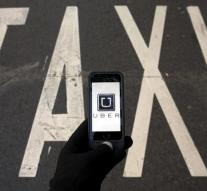 london - Uber started a lawsuit against the city of London. Which demands that drivers from non-English speaking countries do a language test before they are allowed to drive. The BBC Uber said Wednesday that the requirement is bad for its drivers and for the company itself.

Uber has more than 30 000 drivers in the British capital. Thousands of them may bear the brunt of the new rules, says taxiapp.

Uber has also disagreed with the requirement that they must have an office in London, where customers can call to go on a ride. Uber has a branch in Ireland.