Home / Tech / Uber checks whether everything is going well 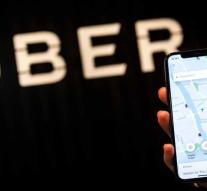 san francisco - Uber now sends a message when it appears that one of his cars had an accident. The passenger must answer a few questions via his app. If something has indeed happened, Uber recommends calling an emergency number.

The Uber app uses the GPS, accelerometer, gyroscope and other sensors in a phone to show whether there has been a collision. Ride Check also comes into action when a taxi stops for too long. The passenger gets the question whether everything is in order and whether it is necessary to make an alarm.

'Safety must be our priority. We want you to know that Uber will help you when you get in the car, whether you are a driver or a passenger, 'said Uber CEO Dara Khosrowshahi on Wednesday. Drivers will soon receive an emergency button and there will be anonymous pick-up addresses, for example at a junction. The app can also be operated with the voice. Uber also introduces two-factor authentication to prevent misuse.

Uber has already experienced all the trouble, from collisions and rape to murder. The new features will be introduced in the coming months. More changes will come later, Uber says.

In Australia and New Zealand, passengers are blocked if they get a bad rating from drivers. It must improve the behavior of customers. If people have four stars or less, they are not allowed to use Uber for six months. The rating system has five stars, and according to Uber, almost everyone has 4.5 stars or more. Passengers with a lower rating 'treat drivers constantly without respect,' said the regional Uber boss against Australian media. 'Be polite and understanding. Take your junk with you and do not mess around in the car. ''

It is exactly a year ago on Wednesday that Khosrowshahi took over the leadership of Uber. He has to clean up and save the company after a long series of scandals.