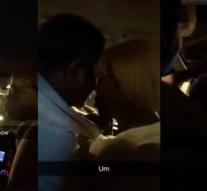 chicago - Aner Manuel could not believe his eyes what happened during his Uber ride in Chicago. A rather drunk prostitute sat next to the driver. During the ride, it was suddenly saturated and then the woman of light mind decided to spoil the driver orally.

Manuel filmed this incident and shared this on social media. The company Uber examined the 'dangerous' ride and decided to give him a 10-dollar voucher, approximately 8.50 euros.

On July 17, it went wrong in the early hours. The video shows how the woman kisses the driver and then rests her head on her lap. Meanwhile, music is playing in the background.

Manuel initially thought that the woman might be the driver's family, as it was not a shared Uber ride. Soon it became apparent that the two had something else to plan.

When the lady was able to satisfy the driver orally, it was enough for Manuel. 'I asked the driver to let me out. I received the ride from Uber, and $ 10 credit, 'he explains to Esquire.

Uber has shown that he has stopped driving. The company is conducting extensive investigations.