Home / World / U2 concert in Paris does not go through 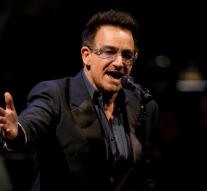 - The concert rock band U2 Saturday would give in Paris has been postponed. The band following the attacks in the French capital in concert with concert promoter Live Nation and HBO, which would broadcast the show, decided not to intervene.

U2 was on Friday in Paris. " We are shocked with disbelief and have taken note of the developments. Our thoughts go out to all the victims and their family ", the band announced on its website. The concert will be " at an appropriate time " yet given, there also can be read.