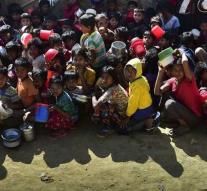 dhaka - The repatriation of Rohingya refugees in Bangladesh seems to be delayed. Preparations are not yet complete, a government official acknowledges in the Asian country.

Around 655,000 Rohingya have fled to Bangladesh from Myanmar. The stream of displaced people started last year after Myanmar's army reacted in a violent manner to attacks by Rohingya insurgents.

The neighboring countries previously agreed that the repatriation process would start on Tuesday, January 23 and last two years at the latest. Refugee commissioner Abul Kalam, however, made it clear on Monday that 'many things still have to be done'.

Kamal stated that another list should be drawn up of refugees who can return. Also the construction of transit camps would not have been completed yet. The official did not say when the repatriation could still start.

A top official in Myanmar said by phone that his country is ready to take care of the Rohingya. 'Our share in the preparations is ready,' said Ko Ko Naing's director-general of the ministry about the resettlement of the refugees. ' We are ready to accept them when they come back. ''

Not all refugees are eager to return to Myanmar. About three hundred Rohingya said on Monday morning to make demands. They made it clear with a loudspeaker and a banner that they want security guarantees and Myanmar citizenship.

Witnesses say that the army intervened in the protest that took place at a refugee camp in the border area. Soldiers drove the demonstrators apart.