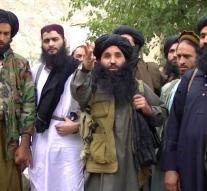 kabul - Pakistani Taliban leader Mullah Fazlullah was killed by an air strike in Afghanistan. The Afghan Ministry of Defense said that the terrorist leader was eliminated during a joint operation with the US forces.

Mullah Fazlullah was considered one of the most wanted fighters in Pakistan. He reportedly ordered the assassination attempt on the young activist Malala Yousafzai, who later won the Nobel Peace Prize. The Americans had promised a $ 5 million reward for information about the Taliban leader, nicknamed 'Mullah Radio.' He thanked his preaching on the radio.

'I can confirm that Mullah Fazlullah, leader of the Pakistani Taliban, was killed during a joint air operation,' said the Afghan defense spokesman. The US forces in Afghanistan confirmed that a 'high leader of a terrorist organization' was the target of an 'anti-terrorist operation. '