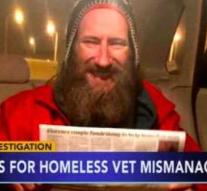 mount holley - An action to raise money for a helpful homeless man has resulted in a legal joust. The 35-year-old Johnny Bobbitt drags a couple to the court that over the internet retrieved more than $ 400,000 (over € 341,000), the BBC. They would have put money in their own pocket.

The homeless Bobbitt had given up his last 20 dollars last year to Kate McClure (28), whose car was without petrol. She thanked the helpful man by starting an action via the internet with her friend Mark D'Amico (39). That yielded a lot more than expected. More than 14,000 people made money.

The feel good story has now come to an end. Bobbitt's lawyers accuse the couple of having used the money to finance a 'lifestyle that they would otherwise have had no money for'. Bobbitt is now living on the streets again. According to his lawyer, he is still entitled to about 3 tons, CNN says.

D'Amico said in an interview that Bobbitt spent about $ 25,000 on drugs in 13 days. He emphasized 'absolutely' that he wanted to give insight into how the raised money was spent. McClure said to feel betrayed in an interview. She said she was terrified that she was losing her job because of the riot.