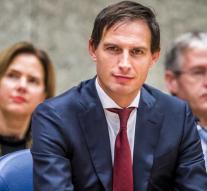 brussels (anp) - The euro area finance ministers (Eurogroup) support the European Commission in its approach to Italy. This is stated in a statement that the Eurogroup will release on Monday, insiders say. Ministers call on the Italian government to take the necessary steps to bring its draft budget for 2019 in line with the European rules, otherwise a criminal procedure is justified.

In the meantime, Brussels has started a dialogue with Rome to persuade the right-wing populist government to adjust the figures 'substantially' to arrive under criminal proceedings. The budget deviates 'seriously' from the agreements on government deficit and government debt. Vice-President Valdis Dombrovkis and EU Commissioner Pierre Moscovici (economic and financial affairs) did not want to say on Monday how long this dialogue could last, but the Eurogroup, including Minister Wopke Hoekstra, supports this attempt.