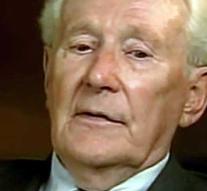 berlin - The man known as the 'accountant of Auschwitz \u0026 # x27; died at the age of 96. In 2015, he was one of the last people convicted of the Nazi genocide of Jews during the Second World War.

Oskar Gröning was sentenced to four years in prison for his role as an accomplice in the murder of 300,000 of the approximately one million victims of the Auschwitz concentration camp. He was in the hospital when he died and his sentence was yet to begin.

Gröning died according to a spokesperson for the prosecutor in Hannover. He himself did not participate in the killing, but counted the lost money of the victims upon their arrival in the camp.