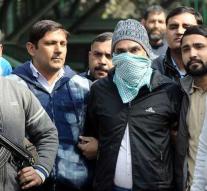 new delhi - A man accused of a series of attacks in India, which killed 56 people, was detained on Monday in New Delhi. Abdul Subhan Qureshi, known as the 'Bin Laden of India', was arrested after a brief gunfight with the police. He was considered the most wanted terrorist in the country.

Qureshi was in hiding for years in Nepal and Saudi Arabia, but returned to India in 2015 to try to revitalize the Islamic terrorist network SIMI, reports Indian broadcaster NDTV.

The man is accused of having placed 21 bombs in 2008 at busy markets, bus stations and in the hospitals where the wounded of the attacks were treated.