Home / Tech / 'Typing By Thinking Only On Lowlands' 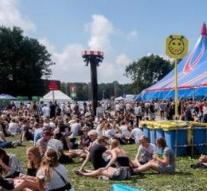 biddinghuizen - Typing by thinking only sounds impossible, but Lowlandgangers can really try the following month during the three-day festival in Biddinghuizen. Researchers at Radboud University are testing a technique that drives computers based on brain activity.

Such a technique that allows you to control a computer, tablet or robot with your brain activity is called a brain computer interface (BCI). Participants get a special hat that measures the brain activity. Next, it is determined how the brain responds to letters that flash over and computer screen. 'This way you can write words, but also stories,' says one of the Radboud scientists from Nijmegen.

The festival visitors are going to write a story together. 'But it may just as well be a poem, or quite complete, That is entirely true to the Lowlands visitors. 'The texts can be read back through a Twitter feed, the festival event and the stickers that the participants receive after the experiment.

According to researchers, the technology can be used for different purposes in the future. For example, it should be possible to turn the light on and off by looking at the light switch only. 'Or you can press an alarm button in your hospital without having to move. '

The 25th edition of Lowlands is from 18 to 20 August at the Walibi Event Center in Biddinghuizen.