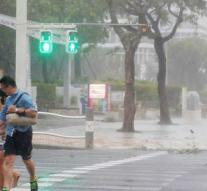 tokio - The heavy typhoon Trami has killed at least two people in Japan. According to local media, about a hundred people were injured and as many as 750,000 households spread across the country without power.

Trami came ashore in southwestern Japan on Sunday and put a large part of public life there. In the night from Sunday to Monday the storm moved over capital Tokyo.

It is the 24th typhoon this season draws about Japan. In early September, eleven people died and more than six hundred people were injured by typhoon Jebi, the strongest storm of the past twenty-five years.