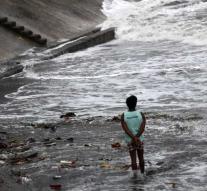 manila - The heavy typhoon Mangkhut has reached the Philippines. The storm came to the land at Baggao in Luzon, the largest Philippine island.

The typhoon, which is accompanied by gusts of more than 255 kilometers per hour, is the heaviest storm that hits the country this year. The authorities take into account floods and landslides. The authorities have evacuated residents of coastal areas and mobilized the emergency services and the army.

Governor Manuel Mamba of Cagayan Province said shortly before the arrival of the hurricane that some 36,000 people were transferred to emergency shelters. He stated that not everyone wanted to leave. 'There are people who have resisted because they wanted to guard their houses. '

The approaching of the storm was also accompanied by severe weather. As a result, the power fell in parts of the provinces of Cagayan and Isabela on Luzon. Also the flight and sea traffic got disrupted.