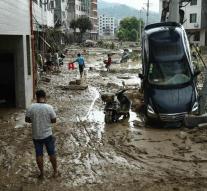 The victims were all in the southeastern province of Fujian, where the storm came ashore. The total economic damage is converted into millions of euros. 16. 000 hectares of farmland and nearly a thousand houses were destroyed, estimated by the authorities. The storm came from Taiwan, where Friday several people were killed and more than three hundred people were injured. There, too, the damage was considerable.

China also faces abundant monsoon rains, which include the Yangtze River has overflowed its banks. That's why thousands of people have been evacuated. They find their homes are often destroyed in the basin of China's longest river back.