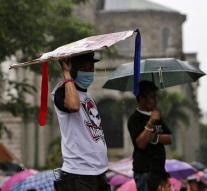 - Residents of the Philippines preparing for typhoon Koppu . Which is heading with winds of almost 200 kilometers per hour on the northern island of Luzon. Millions of people have to take into account , according to President Benigno Aquino that they need to be evacuated because of floods and landslides.

It is according to the BBC for the first time that Aquino does such a judgment since typhoon Haiyan volunteered in 2013 off the coast of the Philippines.

Haiyan proved devastating : more than 6000 people died. Koppu is expected Saturday evening or in the night to Sunday ashore.

It is currently a category 3 typhoon Haiyan was a category 5, the highest possible category.