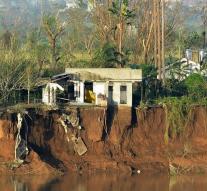 - Typhoon Haima, the worst storm in the Philippines in three years, has claimed at least twelve lives. Local authorities say thousands of hectares of farmland have been destroyed by the storm.

In Cagayan province, where the typhoon late Wednesday came ashore, are measured wind speeds of 225 kilometers per hour. The storm ravaged 60 000 hectares of rice fields were flooded by the heavy rains. The typhoon is compared to the typhoon Yolanda 2013. That led to 6,000 deaths.

Haima is now en route to Hong Kong where all precautions have been taken. Flights and trains have been canceled.