Home / World / Two tons of drugs were found in plane 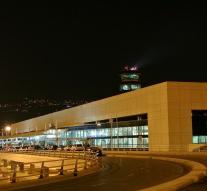 - The Lebanese authorities at the international airport of Beirut two tons of drugs were found aboard a private jet. Five citizens of Saudi Arabia have been arrested, according to security sources.

The plane was about to continue flying to Saudi Arabia. Police found forty bags of amphetamine pills aboard. According to the Lebanese national news agency involves the largest drug discovery ever at the Beirut airport.