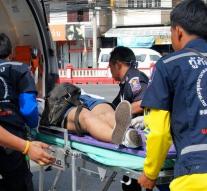 bangkok - The Thai police have arrested two people they suspect of involvement in the attacks of recent days. The police do not want to lose more than that some suspects are interrogated, but Thai media report that it is two men.

The attacks on Thursday and Friday cost four lives. Thirty others were injured.

The police do not think that they should seek the perpetrators of an international terrorist group or the radical Islamic rebels fighting against the government in southern Thailand. Possibly the police suspected supporters of former Prime Minister Thaksin Shinawatra, who have been sidelined by the junta.


The police are still investigating whether some fires that are approximately the same time outbreaks connection with the bombings, the Bangkok Post reports.