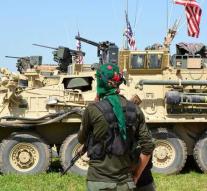 washington/london - An American and a British soldier were killed Thursday night in an attack with an improvised bomb at the place Manbij in the north of Syria. British and American military authorities reported this on Friday.

The victims were part of an Allied unit fighting against the last remnants of Islamic State. They are the first victims of such an attack this year.

Since January 1, ten Allied soldiers were killed outside combat conditions. At the beginning of March, seven Americans were killed in a helicopter crash in Iraq. IS supporters still carry out bombings and guerrilla actions, despite the collapse of the Islamic State caliphate.