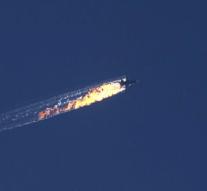 moscow - Two Russian soldiers have been slain during an operation to rescue the pilots of a Turkish- shot fighter. That the Russian General Staff announced.

The rescue helicopter was shot at from the ground, according to the Russians. The dead are a helicopter pilot and a passenger. Earlier in the day, the Syrian Observatory for Human Rights reported that a Russian helicopter had been shot and had to make an emergency landing. Syrian rebels blew up the helicopter then with a rocket launcher.

Moscow is following the shot device suspended all military ties with Turkey. Moreover sent a warship to the eastern Mediterranean, as Russian media report.