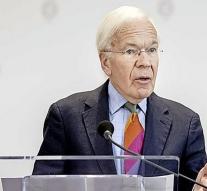 editors parliament the hague - Informer Herman Tjeenk Willink has limited the options for a majority cabinet to two. The door for a cabinet with the Christian Union is on the verge. D66 leader Alexander Pechtold is slowly moving, but still preferred PvdA.

Pechtold, who blocked an earlier attempt with Christian Union, said after his conversation with the 75-year-old minister of state that there is no barrier to this option. However, he sends out a government agreement that is so wide that left-wing opposition parties can also find themselves. He specifically mentioned the theme climate. Pechtold gave VVD and CDA homework to think about how to meet him.

Earlier this day, Tjeenk Willink concluded that there is no chance of a cabinet with the PVV and the SP. In a letter to the informant, VVD Foreman Mark Rutte writes, for example, that Wilders went too far with his 'less Moroccans', ran away from troublesome negotiations in 2012 and undermined the judiciary.

Sybrand Buma of the CDA finds that the PVV is becoming increasingly radical and that Wilders has not done anything to restore confidence since the break in the Catshuis.

SP leader Emile Roemer continues to refuse to sit with the VVD. His suggestion to form a coalition with left-wing parties, Tjeenk Willink does not find realistic. Such a combination would not be stable.