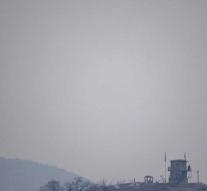 seoul - Two North Koreans have fled to South Korea by boat. The two were found by the South Korean army on the Yellow Sea, reports the Seoul-based news agency Yonhap on the basis of government sources.

One of the refugees was a North Korean army officer, who said he wanted to go over. It is known to be the first case of overflowing North Koreans, since the meeting between North Korean leader Kim Jong-un and South Korean President Moon Jae-in in April.

Fleeing North Koreans often turn to China. In November last year, a soldier was seriously wounded who attempted to cross over at the heavily guarded demilitarized zone between the two Koreas.