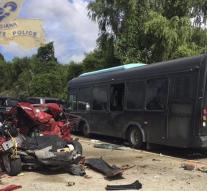 - When a serious accident with a bus in the US state of Louisiana, two people were killed and dozens wounded. The bus driver, who transported aid workers to clean up damage from flooding in Baton Rouge, drove in an accident on the highway from New Orleans.

The bus driver, an illegal immigrant from Honduras who was not in possession of a license, hit the control of the vehicle lost on a wet road and rammed into stationary cars and three firefighters who helped in the recovery of an accident. One of the firemen and an occupant of a vehicle lost their lives. Between thirty and forty people, including many occupants of the bus were injured. They were transferred to hospitals in the region.