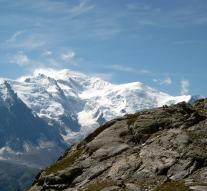 - Two alpinists from Lithuania Sunday killed in an avalanche on the slopes of Mont Blanc. The victims, a man and a woman, were, according to local police experienced climbers. A third climber survived the avalanche, which at around 3200 meters altitude raged about the victims. The risk of avalanches has increased this weekend in the Alps. Saturday was about 30 centimeters of snow, which in combination with the still mild temperatures makes for an unstable snow cover.

The avalanche of Sunday was the first fatal avalanche this season in the French Alps, Le Parisien reported.