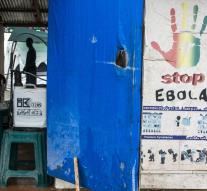 geneve - Two people in Guinea have become ill with the Ebola virus . That is what the World Health Organization in Geneva Friday. This puts an end to a two week period in which throughout West Africa, no new cases were detected.

The WHO was about to declare Guinea virus free and the new cases are therefore a big disappointment. Neighbouring countries Liberia and Sierra Leone faring better. Liberia is considered virus-free and Sierra Leone almost.

In this area died in 2013 and in 2014 approximately 11 000 people from the disease. Officially holds that if 42 days have recorded no new cases, a country Ebola is free.