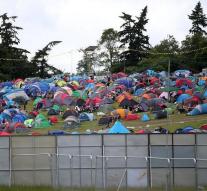 perth - At a festival in Scotland this week a man a woman deceased. Police have launched an investigation and treats both deaths separately. Further details are not known, reports The Guardian Friday.

The first campers arrived Thursday for the three-day festival T in the Park. Besides the two deaths the police are investigating a mass brawl that broke out two hours after opening.

Last year, the body of a 36-year-old man was found in the toilets at the biggest music festival in Scotland. The police did not assumed a suspicious situation.