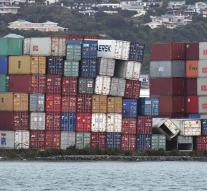 - When the earthquake in New Zealand have been at least two deaths.

The South Island was at the beginning of the night rocked by a massive earthquake, 7. 9. The epicenter was about 100 kilometers from the city of Christchurch. The shock was felt across the country.

As a result of the quake emerged tidal waves of 3 to 5 meters high. The waves reached the night the east coast of New Zealand. In different places was a tsunami alarm. Residents of the coastal region was advised higher search field.

Wellington hundreds of people on the street run. the power cut in several places. Wellington were some buildings, including hotels, vacated. On Twitter are numerous photographs of damage to homes.

An earthquake with a magnitude of 6.3 in the region caused in Christchurch in February 2011, killing 185 people and hundreds of injured and there were 10 000 buildings severely damaged. In February this year Christchurch was shaking again, but then there was only material damage.