Home / World / Two dead after shooting down helicopter in Syria 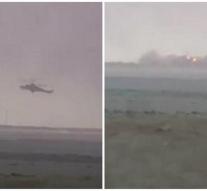 palmyra - In Syria Friday an army helicopter shot down by militants. The two Russian pilots are deceased, according to the Russian Defense Ministry. The incident occurred at Palmyra, a city in the middle of Syria. Islamic State (IS) published Saturday a video with images of the crashing helicopter.

The Russian pilots were involved in the attack on a number of IS fighters in Homs. They received a request for help from the Syrian armed forces. After the ammunition from the Russians ran out and they wanted to turn back the IS fighters struck.